How and with what consequences do political executives and media interact? This question is at the heart of this research project. The starting point of the project was in mid-2014, while the span of the project formally ended at the turn of the year 2021/2022. The project was carried out jointly by researchers from the universities of Södertörn, Wrocław, Tampere, Kaunas, and Helsinki; with funding from the Foundation for Baltic and East European Studies – Östersjöstiftelsen (https://ostersjostiftelsen.se/en/). 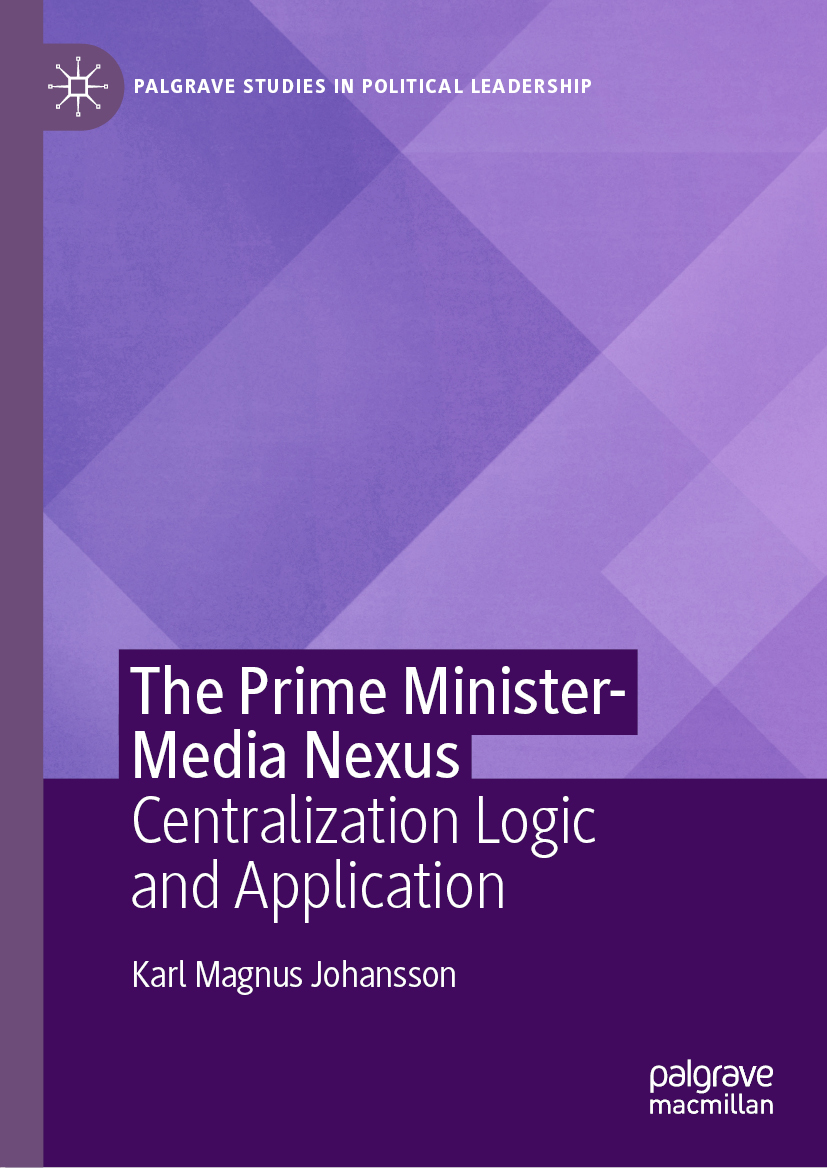 This book offers a systematic inquiry into how, why, and with what consequences media affects governments and the standing of prime ministers. It aims at an understanding of how media has caused institutional effects in government, as well as at advancing a unified theory of government communication. The author develops a logic of centralization and applies it to one case, Sweden. Government communication has been institutionalized, tightened and centralized with the prime minister and has changed irreversibly. Analysis of how the government communication system has evolved, mainly in its institutional structures, suggests that the shift to centralization arose more out of necessity than choice. For prime ministers most of this is about finding ways to ensure that the entire government respond to media uniformly. As governments face a set of functional demands from media, different kinds of media, uniformity has been a paramount objective. Nevertheless, this development involves shifting dynamics of intra-executive relations and a shift of power away from ministries to the prime minister’s office; the apex of political power. The prime minister has been empowered at the expense of ministers through the concentration of power and resources to the executive centre. That is partly because of media, which reinforces political hierarchies. That and the centralized control of government news in turn raises further questions about democratic governance and the nature of modern-day governing.

“This welcome study of Swedish government adds to growing evidence worldwide that communications are a formidable force in the centralization of political power. Karl Magnus Johansson makes a powerful argument that the media’s influence on institutions shapes and augments prime ministerial authority.” (—Alex Marland, Professor of Political Science, Memorial University of Newfoundland, Canada, author of Brand Command: Canadian Politics and Democracy in the Age of Message Control (2016))

“Karl Magnus Johansson reveals the paradox between ever more fragmentation, diversity and decentralization of media and ever more centralization of government communication. His study fills an important gap as it advances theoretical reflection and empirical understanding of how governments respond to volatile communication environments by reorganizing their functions to manage the demands of the media.” (—Barbara Pfetsch, Professor of Communication Theory and Media Effects Research, Freie Universität Berlin, Germany, author and editor of Political Communication Cultures in Europe: Attitudes of Political Actors and Journalists in Nine Countries (2014)) 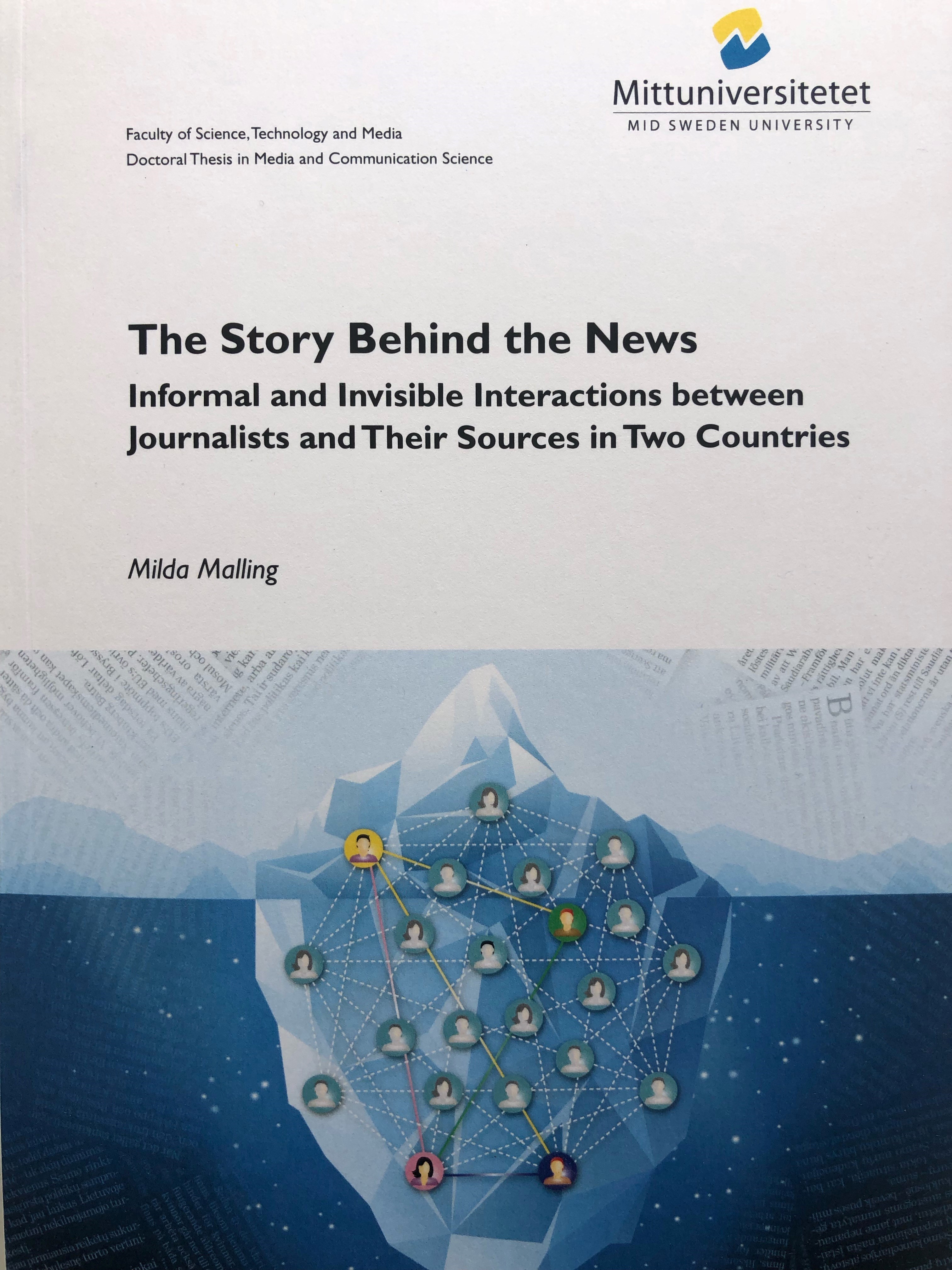 The Story Behind the News: Informal and Invisible Interactions between Journalists and Their Sources in Two Countries, by Milda Malling (2022)

This doctoral thesis explores how formal and informal relationships between journalists and their sources are reflected in the news-making in Lithuania and Sweden. How do journalists and sources negotiate their social and professional roles in their relationships with each other? The results indicate that up to half of all sources who contribute to the media content stay invisible. Also, at least one-third of sources influencing the content are connected to the journalist with closer than purely formal social ties. Formal and informal and visible and invisible forms of interaction between journalists and sources presuppose different roles these sources get to play in the news-making process. These aspects are a significant part of the journalistic routines regardless of the country context. The study concludes that while distance between journalists and sources is a normative condition to achieve autonomy, social relationships come into play when navigating the competitive environment. Professional and social roles can complement, overlap or be used interchangeably in journalist–source interactions, since sourcing the news is not only a professional practice but also a social practice between human agents who adapt to each other and the expectations from the environment. Informality and formality can drive each other, as informal solutions from journalists and sources emerge as a response to the formal structural constellations that are coordinating and professionalizing the government communication. Prevalence and reliance on different social ties in a certain context, therefore, could be a variable in studies of journalism and political communication culture.

This book explores the interplay between government and media drawing on unique evidence from and in-depth analysis of four national cases: Finland, Lithuania, Poland, and Sweden. Based on the chapters dedicated to each country, five additional chapters address the following cross-national themes: government communication, social media, formality/informality in journalist-source relations, mediatization of politics, and political communication culture. The result is an illuminating and original analysis of politics, political communication, media, and journalism and offers greater understanding of the realities of government – and democracy – and media in practice as well as the role of media within contemporary politics.